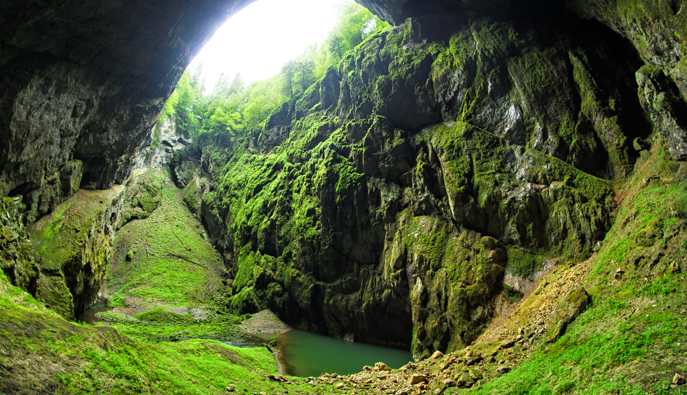 The tour to the legendary Moravian Karst (Moravský kras) will present you the opportunity to touch the beauty of the massif and natural caves, that haven’t been touched by a human for centuries. It encompasses a number of notable geological features, including roughly 1100 caverns and gorges and covers an area of roughly 92 km². Currently, five of the cave systems (Punkva Caves, Balcarka Cave, Kateřinská Cave, Výpustek Cave and Sloupsko-šošůvské Caves) are open for public tours and exploration.

This region is also home to one of the most important single geological features in the Czech Republic, the Macocha Abyss, a gorge 138 m deep, which was formed when the ceiling of an underground cave chamber collapsed. Macocha Abyss is also the place where the Punkva River begins to run underground through the Punkva cave system, and two small pools of water are visible at the surface.

The Moravian Karst is a popular tourist attraction in the local area, and large numbers of tourists visit in the summer months. In addition to caverns, the nature preserve also contains well-marked bicycle trails and hiking paths to explore.

The Pernstein castle is also worth your time: the ancient fortress haven’t been reconstructed since the day it was built, and it’s still looking at its visitors with the wide-opened metaphorical XVIth century’s eyes.